Hi, thanks for checking out the zine. Please add a tip to make a financial contribution to the following funds:

Print & fold for a zine addition to your library.

What's new in the zine?

Two six-sided die (d6) and one coin are all that is required to play.

Beneath the city, down into one of the nondescript entrances to the cave system, the catacombs and ossuaries of forgotten times are waiting.

I hope this finds you well!

COMING SOON: LOST in the FOREST

In order to download this game you must purchase it at or above the minimum price of $5 USD. You will get access to the following files:

Cool game! I'm looking forward to playing it, but I'm confused about a couple of rules.

First, in the combat example, it says that a 6 would cause a second strike against another party member. Is this a special rule for when an enemy rolls a 6? Does that second strike automatically hit or does the enemy roll again? I don't see it mentioned anywhere outside the example.

Second, I'm confused about how encounters work in general. When I encounter a SOLDIER, do I immediately roll on the SOLDIERLY ACTS table, or only if the coin flip is tails? If the coin flip is heads, can I choose to just peacefully go past them and avoid the encounter entirely? What does "join the party" mean in the line "H - player advantage to attack, allow safe passage, or join the party"?

Hello and many thanks!

When you roll d6 for an enemy/monster HP and get a 6, and in the case where that same enemy gets an HP bonus, instead of increasing their HP they attack twice per turn - roll d6 for each of these attacks.

This next point has shown me that I didn't put this instruction in the text - whoops! My intent is for the following to happen:

Some encounters require a COIN TOSS to determine which set of actions to take - HEADS representing an advantage to your character, presenting the option to incorporate an enemy into your party, let them leave and avoid combat, or to go ahead with an attack. TAILS will require you to roll on the accompanying table. This will definitely be an edit for the next version.

Thanks, please let me know if you have more questions!

I'm having trouble interpreting the Attack & Defend rules stated in the early part of the rules. It says "Each character has d6 HP. To ATTACK & DEFEND roll d6, if the result matches or is higher than the attackers HP the blow/parry was successful. A successful attack SUBTRACTS one HP. Reaching zero means character death. In cases when a character HP exceeds 6 - roll twice to attack/defend instead."

My questions are: how does defending work? Does this mean that if a character is attacked, I can defend instead of attacking, and add that d6 roll(s) to my current HP, and that is what the opponent must succeed to lower my HP? Or is it the higher of a d6 roll to defend and my d6 of health?

On another note, if each character has a d6 of HP, how can they have an HP that exceeds 6? Is there a wording that separates attacking and defending more clearly?

In some cases a "monster" or character is given a bonus HP due to the specific type of encounter - these bonuses are described in the last section of some, but not all encounters. For example, rolling a 6 on the d6 GHOULISHNESS table gives the GHOUL +2 HP. If that same GHOUL has 6HP, instead of adding the two for 8HP, that GHOUL now rolls to attack twice (or gets two consecutive attack turns). Hopefully this makes the "monster" more powerful but still possible to "kill".

I hope this helps! Please let me know if you have questions!

"according to the (2D6) result, draw an arrow where you actually enter the next chamber" doesn't make any sense to me.  If I'm in a circle with two ways one, one way which I came from on the left, and one which I haven't been to yet on the right, and I roll "1 hash mark to the right" on catacomb confusion, does that mean the hallway to the right is twice as long? Or does it mean chose the next hash mark to the right to leave, in which case I think saying clockwise and counterclockwise instead of right and left would work better.

Could someone please explain this to me? I feel like I could have a lot of fun with this game, but I'm just totally stuck on this detail.

Also, for the 4th Cultist Discovery where the party follows the entrails of the cultist one room over, what happens when we follow the entrails? Do we fight the cultist? Did he lose health from stabbing himself? Is he just dead on the ground for us to loot? Do we ignore his existance and make a separate 2D6 roll for the room?

I feel like all of my questions would be alleviated if there were any videos of people playing this game online, so I can see an example in action. Would such a video be something you would be willing to make?

I should have written that yes, the CULTIST is certainly dead - or near-death! But the intent is to allow movement to an adjacent chamber of your choice without having to roll 2d6 CATACOMB CONFUSION.

And yes! I have often thought about making a video playthrough/instruction - as well as a major overhaul of the rules with some help from outside designers. I'd love to make a video, but I currently don't have a camera - or haven't learned how to use my phone to get decent film - still using an old 2013 model. But yes that's something I would love to do eventually!

Great, thanks for the help.

My advice for filming would be to go with the best value to performance smartphone camera right now is the Google Pixel 4a with prices ranging from $220 to $399. It uses lots and lots of post processing and AI tricks to make its photos look way better than they have any right to be, so instead of paying for an array of costly sensors, you buy a phone with one rear camera that gets dolled up to an amazing degree; plus it uses a nice, stock version of Android.

The first step is to mark your intended path with an "i" - you may not get the chance to follow that path if you roll 2d6 CATACOMB CONFUSION and have to deviate. If you are forced to deviate, mark that as the actual path you take with the "arrow". The "right" and "left" are intended to mean "of the hash mark with an "i". Clockwise and counterclockwise also work and serve as a great visualization for a character standing in the chamber!

Thanks for checking the game out! I hope this helps!

I'm having the hardest time getting this to print correctly. I did 2-sided smart edge and I end up with full pages that are upside down on the reverse, rather than a zine format. Any suggestions on what I'm doing wrong?

I have a rules question and a suggestion.

The question: What's the TRAVELER "direct chamber-to-chamber movement"? Is it automatically jumping to any chamber on the map (ignoring all of the chambers are in between and saving light)? Or only moving to a connected chamber (but avoiding CATACOMB CONFUSION)? The former seems a little overpowered (even if it's only once/game); whereas the latter feels underpowered (especially since it's only once/game.)

And the suggestion: Could you add the 'burn one unit of light' step in the ENTER THE CATACOMBS section? I keep on forgetting that step!

Hello and thank you!

I think it's a great idea to add the "burn one unit of light" step. As for the Traveler, "only moving to a connected chamber (but avoiding CATACOMB CONFUSION)" is the correct interpretation. I'll have to think of a better solution for that, maybe they can do it 3x per game, I'm open to suggestions!

I'm about 75% done with the next version LOST in the FOREST and feedback like this is very helpful, thank you for checking out the game and sharing your thoughts!

A neat little solo adventure in which surviving is less the point than exploring a creepy underground labyrinth. It's short and to the point and does very well what it sets out to do!

I was wondering if you had any update on the status of LOST in the FOREST :)

Hello! It’s still in the works - it’s turning out to be much more expansive than the original idea and taking me a while to piece together. Also look for a ‘Mapping the Catacombs’ update! 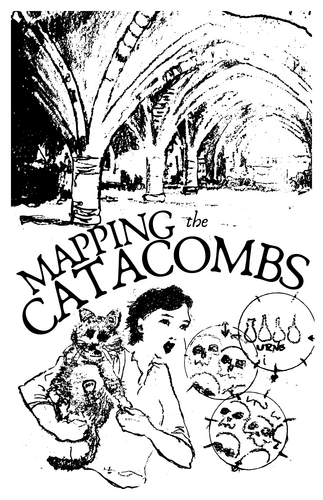 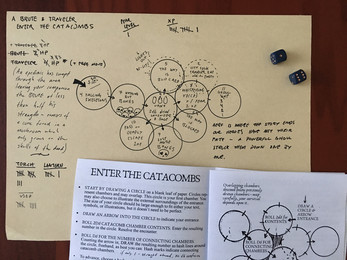 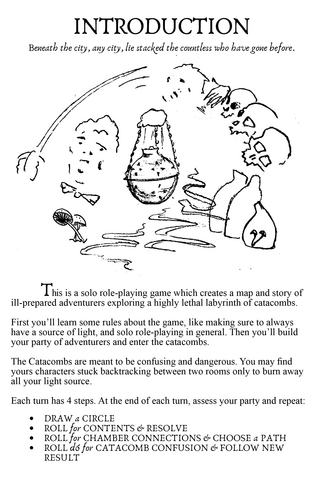 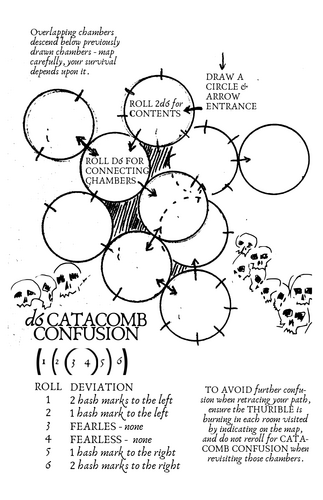 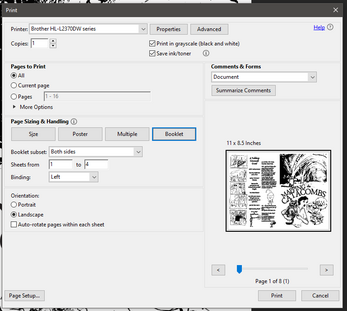